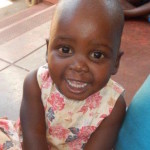 Baby N was abandoned by her mother in a high density suburb. She asked a young man to hold her child whilst she allegedly went to call her aunt and did not return. The child was taken to the nearest Police Station and later placed into our care after efforts to trace the mother or aunt had failed. Baby N was estimated to be about 14 months old when she was placed, and she was in a malnourished condition. We found her to be quite aggressive on arrival but are pleased to share this aggression has subsided as she has settled in.