David and Andrea Lee from the UK, were drawn to Bulawayo in 2009 to assist in a New Frontiers church plant and pre-school project centred on the village of Trenance.  After serving faithfully with this ministry for 2 years they were aware of the many orphans in the community, as well as children who were not receiving any form of education, due to financial hardships. They set about purchasing a property with land that was capable of schooling up to 50 children as well as providing accommodation for those among them, categorised as vulnerable children.

Their vision under the name of Children of Grace, was developed at No 58 Primula Road North Trenance where the doors were opened in 2012 to cater for 18 children from the area, 5 of whom were also provided with a comfortable, loving home, under the supervision of a house mother, Miriam Mbewe. Along with David and Andrea two teachers were recruited and trained to offer the A.C.E. curriculum to mixed age classes initially up to 11 years of age.

The property is set on 5 acres of good agricultural land and has the benefit of a bore hole and water from a stream flowing through the lower section. It was part of the patrons’ vision for the project to develop a high degree of self-sufficiency in maize, vegetables and chickens.

Unfortunately, David and Andrea failed to secure work permits and early in 2012 they left Zimbabwe. For the next 2 years the project was entrusted to another holistic NGO with a base in Trenance, but regrettably, for several reasons, this did not work out and consequently the project stagnated for more than 2 years. It was at this point that David and Andrea requested that ONM step in with their resources and desire to continue the vision.

To be a community of faith, where orphans and vulnerable children are cared for in a loving family environment, holistic education and vocational skills are provided for children who are disadvantaged and have missed significant amounts of their schooling, crops are grown and broiler chickens raised, as people live and serve together under God.

In 2010 a vision for Children of Grace was shared by Pastor Murray Parr whilst he was out visiting at the Trenance property, he believes that God birthed a vision for His people to be established, growing in faith and living under His protection. The property Of David and Andrea’s was always going to be used for His good pleasure despite opposition from the previous TRUST.  He believes God originally led David & Andrea to this property knowing the potential it has to create a safe place for widows and orphans. Their faith to commit time and finances to purchase this property and then hand it back to God not only proves their faith in the project but also their humility to surrender Children of Grace to God´s will.

Children of Grace was always going to be an environment where true believers can live from the land, be actively contributing to the farming of that land and most of all growing in their faith and making disciples for Christ. Children of Grace will become a community growing in faith, hope and love, a thankful community filled with Godly joy that overflows into the greater community of Trenance, a community growing with the vision to teach and equip His people to serve Him and their brothers and sisters in the faith. This will be a long term project and will come with opposition from the enemy. Never the less the devil has no power over this project. God will establish our goods works that is in accordance with His Word. 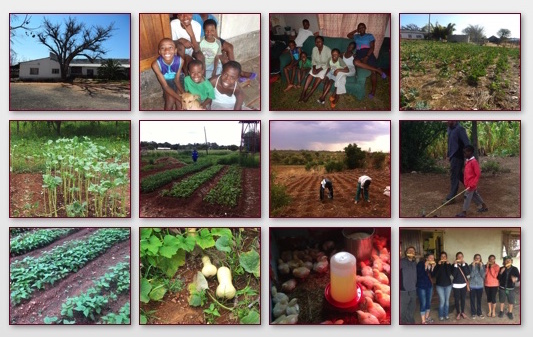 Where we are at currently

·         Miriam Mbewe is currently caring for her son and 5 other vulnerable children on the property. This home is run under the same vision as our forever family units.

·         We have started growing crops and raising broiler chickens, overseen by Ernest Mhlamba who lives on the property. Ernest graduated from Ebeneezer Agriculture College, which provides agriculture management to vulnerable young people.

·         Another vulnerable child (who had been very unwell) and his father have been offered short-term accommodation on the property given their very challenging circumstances, and that the father is the sole care-giver for his son. Pedzisai is now assisting in the agriculture project and his son Clifford now attends a local high school.

·         Increase the amount of crops being grown and the number of chickens being raised to benefit the ministry and raise funds for the ministry.

·         Renovate the part of the building where Lighthouse Christian Academy will be moving to, from where they will provide holistic education and vocation